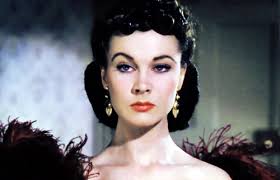 I’m going to introduce a woman of exception, who broke the glass ceiling of her time; she worked hard and confronted men throughout her story: Scarlett O’Hara.

Gone with the Wind.

GWTW was a huge success at that time and the book won the Pulitzer Price of Fiction which is the highest reward for a literary piece. In 1939, the book was adapted to cinema. It was the first blockbuster in the history of cinema. The film directed by Victor Fleming was acclaimed by critics and received 10 Oscars. Throughout the story, we follow the evolution of Scarlett O’Hara and her development as she grows from a superficial young lady into a more mature and sensible woman.

In the movie, Scarlett is played by British actress Vivien Leigh.

Scarlett O’Hara is the main character of Gone with the Wind; she is from Georgia in the South of the US. She is the daughter of a rich Irish immigrant. She is what we was called at that time a Southern Belle, that's to say a young lady born in an aristocratic family of rich planters of the Deep South of the United States before the Civil War, at the time of slavery.

At that time, women did not play a part in society, they didn't go to university, they didn't work. Their only concern in life was to be good-looking and to find a proper and rich husband.

Unfortunately for her, the man she desperately loves is already engaged.

She therefore gets married to a man she doesn't love and begins a relationship with the rich yet cynical Rhett Butler.

When the civil war breaks out, Scarlett has to learn how to manage alone. She becomes a strong woman who forces respect.

She gradually grows from a prissy Southern belle to a respected business owner. Scarlett isn’t like other women and never needs the protection of a man. She is a woman who dares to be the sort of woman she wants to be rather than who she is expected to be. Scarlett never makes excuses for who she is.

Today, it’s easier to accept a woman who puts her career and her ambition before anything else but in Scarlett’s time it was really unusual and inappropriate. At that time, women had to be submissive and were supposed to let  men take care of them.

Scarlett doesn't give a damn about that. The fact is that she lives in a difficult time and has to choose between love and survival. She ignores social norms and is ready to do anything to achieve her goal.

Deep inside, she is just a woman desperately searching for love. She is extremely passionate. She wants to love and she wants to be loved.

Scarlett is a lesson to us all. She shows that one can survive to anything. She is a very strong and determined woman. She is a modern heroine who will continue to inspire women and to encourage them to go as far as it is humanly possible...