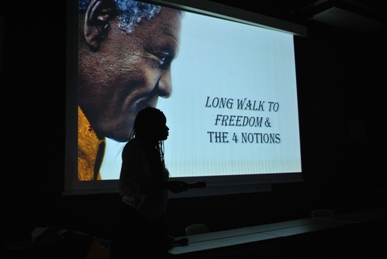 ” is the celebration of the South African first fully democratic presidential election. This national Day is celebrated on April 27th   every year, since 1994. This year, thanks to our English teacher Ms. Ngnasoke, Fustel de Coulanges senior students celebrated this special Day in a very particular way.

On Tuesday April 21st, we were privileged to welcome the South Africa’s High Commissioner and two of her collaborators in our school.

The celebration kicked off with our headmaster’s welcome speech.

Then, a group of seniors made presentations about the rainbow nation and its charismatic hero, late Nelson Mandela.  The presentation began with the South African national anthem to welcome our guests. Then we immediately continued with a reminder of what the apartheid system was all about. The word “apartheid” comes from “Afrikaans” - the language of white people in South Africa – and it literally means “apartness”.

The apartheid system was a discriminatory system based on racial segregation which was legal in South Africa from 1948 to 1991. At that time, black people had fewer rights than White people; they didn’t have the right to vote or to be elected. Apartheid was the oppression of the ethnical minority of white people over the majority of black people in South Africa. Many black South Africans fiercely fought for equality, and the most famous of all was, Nelson Mandela.

A group of students thoroughly screened the life of that hero of the times: his fights, his life in prison, and his election as the first black South African president in 1994. That’s actually the purpose of the celebration of Freedom Day, which is the symbol of equality, after half a century of segregation.

Nelson Mandela is considered a hero by so many people. We mentioned the so many tributes paid to him around the world in the course of his life and much more even after. Mandela received an extraordinary number of tributes in so many artistic forms that it’s impossible to show them all. The ultimate recognition was certainly the seven days of national mourning after his death in 2013, and the state funeral, which witnessed the presence of more than eighty foreign head of States.

Before the celebration on April 21st, in class to deepen our understanding of Mandela’s life; we reviewed  the movie “Long Walk to Freedom” which is based on Mandela’s autobiography and we linked it to the four notions we studied in class; namely the idea of progress, spaces and exchanges, places and forms of power and myths and heroes.

Just to state one of them, we can say that the election of Nelson Mandela illustrates the idea of progress because, it was a social progress not only for the rainbow nation, but also for the international community. Nelson Mandela struggled to see a democratic South Africa and thanks to his actions, many black people could have access to potable water just as white people. On top of that, we have to keep in mind that, during the Apartheid system, South Africa was ostracized. However, during his mandate Nelson Mandela multiplied political visits to break up South Africa’s isolation from the international exchanges. This fragment of his life illustrates the notion of Spaces and exchanges.

After our presentations, the High commissioner granted us with a great speech, as beautiful as she was herself. She talked about the remains of apartheid in South Africa. She said that, even though segregation is abolished and black people are way more prosperous now than back in the time of the apartheid system, that doesn’t mean there is no more racism at all.  As a black woman, she was deeply interested in the black people‘s fight for their rights.  She was once a teacher and fully understands which should be the proper way to teach this difficult aspect of their country’s history. To her, children must completely be aware of what happened in the past, in order to acknowledge racism and fight against it.  She was therefore very proud of our work, because it did not only show our interest for her country but also our interest in history, which was the subject she taught when she was a teacher.

An interaction with students followed her speech. We were allowed to ask her many questions and our exchanges were mainly about black people’s reactions to racism. We came to understand that these responses were just natural responses to centuries of oppression. The high commissioner clearly stated that beauty doesn’t exist in only one form. Therefore, a phrase like “black is beautiful” is necessary to rebuild black people’s confidence.

At the end of the celebration, we expressed our gratitude to our honorable guest for having set a time for us, out of her extremely busy schedule. We’ll remember her kind statement which moved us so much. She said “You are all beautiful because, this exactly what a beautiful school should look like: white, black and mixed-colored people all together”.

Then, she distributed to each of us South Africans colorful wrist bands and gifted our teacher with rainbow colors teaching materials. To conclude, adjectives that best describe this experience are simply; awesome, warm, cheerful, beautiful and colorful.

We say many thanks to our teachers, for printing our senior year with such a memorable event.

On behalf of the 2016 senior students

“On 8 January 2015, the 3ème euro went to the High Commission of Canada in Bastos, Yaounde, to interview  Mr. René Cremonese, The Canadian High Commissioner. “