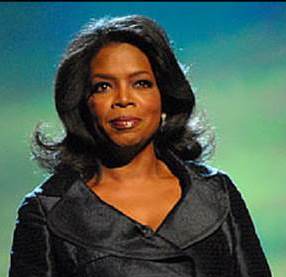 Hello, today I’m going to talk about Oprah Winfrey. Let me raise the following question: "Why is Oprah Winfrey a model for young women?". To begin with,  Oprah Winfrey had a very difficult childhood. However, she has now become one of the most powerful women in the world and she has become an icon for women.

Oprah Winfrey was born in Mississippi in 1954. She came from a poor background. She had a very hard life. Her mother had to work a lot so she was never at home. The first time when she was sexually abused was at the age of 9. She was molested by her cousin, her uncle and a family friend. However, she was a good student. At the age of 17, she attracted the attention of the local black radio station and this is how her career began...

Now I’m going to tell you why I have decided to talk about Oprah Winfrey. The answer is simply because she is the perfect incarnation of the American dream. She started from scratch and gradually, through hard work and performance, she became a celebrity praised by all. Every day, a lot of women are physically and mentally abused. A lot of women suffer and are persecuted. Women work as much as men so why should they always be insulted or judged?

As I said, Oprah had a very hard and sad childhood but she became a strong woman. She never gave up her dreams and she has now become an influential woman.

Honestly, could you imagine that a little girl who was sexually abused, who was persecuted by her classmates just because she was a poor girl, could become the most powerful woman in the world? Oprah Winfrey embodies the hopes of women. Every young girl dreams of being loved and respected like Oprah.

If this happened to Oprah why couldn't it happen to you and I?

Let me give the final world to Oprah herself when she delivers this beautiful message “We can't become what we need to be by remaining what we are.”