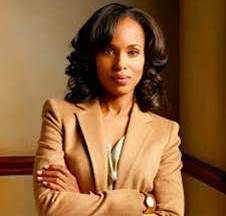 All around the world, Women have always and systematically been devalued and debased, politically, socially, economically, even in their homes. Gender inequalities are systematically in their disfavor. Particularly exposed in domestic life, women are also subjected more to sexual violence. In the economic sector, the employment of women remains confined to the least valued positions, also in agriculture, trade and services. Scandal is a dramatic series that depicts strong and powerful women, exercising marvelously what society considers being the work of men.

I.    A DRAMA TELEVISION SERIES

Among the best series in 2013 distinguished by the American film institute, four were created by women, including Scandal.

Scandal is an American television series broadcast from 2012 and created by the American director and screenwriter Shonda Rhime, who is considered the most powerful woman on American TV; she has created popular series such as Grey’s Anatomy or Private Practice. Centered on the workings of politics, Scandal tells the professional and personal life of the most powerful names in the white house. Conspiracies, murders, thrilling suspense, reversals of situation are the main themes of the series. More than politics as such, Scandal deals with the relationships between the women and men who make up this environment.

Inspired by the life of Judy Smith, the former communication advisor to George W. Bush, Olivia Pope is portrayed by the actress Kerry Washington. Pope is a crisis manager based in Washington D.C, who runs her own firm, Pope and Associates that specializes in political situations, they call themselves “gladiators in suits”. She is a former lawyer and white house aide who helped the United States President win office. Olivia Pope constantly achieves her goal, especially on a professional level and leads her team with an iron hand.

Played by Darby Stanchfield. Abby is a secondary but  important character. Victim of domestic violence during an arranged marriage, she applies for divorce with the help of Olivia. Abby joins the White House as the Press Secretary to President’s chief of staff. At first she is not recognized for her serious work and rejected by her colleagues at the White House but Abby has a strong character and she manages to impose herself so, as to be respected.

In this series, these two heroines display their professional ambitions without moods. They have taken power in their jobs and are the best in this field. They are entirely devoted to their jobs, without a private life and sentimentally free. We are captivated by their rise on the professional level, in a male-dominated society. They fight despite the inappropriate comments. They are what women want today. They are role models. Olivia and Abby represent power, ambition and success. They are the hope that in a near future, women and men will all be equal. This series shows us that with principles, faith and courage; women can break the barriers of society and destroy  sexist prejudices and discrimination.