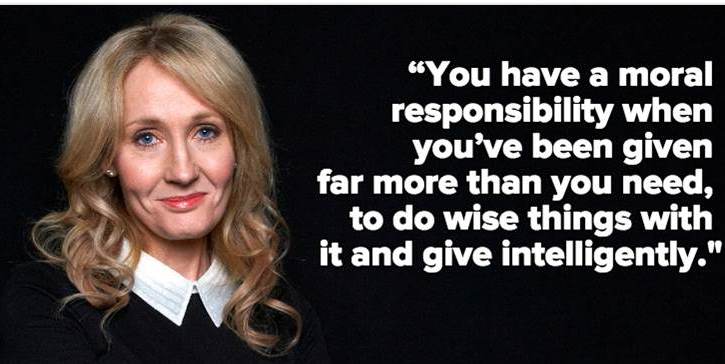 To honour the international women’s day, we want to talk about a woman who embodies self-made success : JK Rowling.

In the course of our presentation, we shall attempt to answer the following question : How did JK Rowling become famous and powerful ?

Joanne Rowling, aka JK Rowling is a British novelist, screenwriter and film producer, best known as the author of the Harry Potter fantasy book series.

The inspiration of Harry Potter came to her while she was taking a train from Manchester to London. At the same period, her mother died, and she went to Portugal to teach English, and she continued writing her book. The first tome book was released in 1997 and immediately became a best seller.

The whole Harry Potter saga was a worldwide success. More than270 million copies in 62 languages have been sold worldwide. The books have gained worldwide attention, won more than 20 awards and sold more than 400 million copies in English.They have become the bestselling book series in history. The Harry potter books have gained recognition for reviving an  interest in reading among the young generation at a time when  children were thought to be abandoning books for computers (next slide)

JK Rowling said that « The magical world of Harry Potter is for anyone. It’s for anyone who’s ever had a bad day and just wishes to escape. It’s for every lover of fantasy and magic. It’s for someone who just wants to curl up, with a cup of hot chocolate and forget the rest of world. It’s a place to escape to, full of magic and wonder beyond anyone’s imagination. It’s for the person who feels alone to finally feel at home and at peace. »

Over the years Harry Potter has had a huge impact on today’s generation. Those who’ve grown up reading and watching these books and films will carry the memories forever. It got a whole generation reading, believing in something bigger, something amazing, something magical.

Why is she Powerful?

Forbes named Rowling as the first person to become a US dollar billionaire by writing books. She was removed from the rich list of Forbes in 2012 claiming that her 160 million $ in charitable donations and the high tax rate in the UK meant she was no longer billionaire. In 2013, she was assessed as the 13th most powerful woman in the UK. In 2016,  Rowling's fortune is estimated at 600million pounds , ranking her among the 200 richest persons in the UK.

JK Rowling is all the more admirable as she is a self-made woman., she comes from a poor background and she has made it all the way to the top through hard work and perseverance. Today, she's one of the richest women in England, and she’s also very generous. She has a noble heart and she is an example to follow for us all.